I go back and forth from time to time with my Task apps. I am most recently using Things3 because of it’s Craft integration and being a very well design app that is easy on my eyes. However, since the app only generates “Areas” and “Projects”, it’s made me start thinking about switching to an app that allows me to recreate a similar JD folder structure.

I know that this works with OmniFocus, but I’ve never been a fan of their UI. I can also set up folders in Tasks, but for some reason, I can’t get behind it.

I’ve never been a fan of the ios Reminders app, but I do use it for random tasks from time to time.

What app do you find works well for you?

Just last week I started (a bit of) tinkering with my system again got curious about if and how I would use Things in concert with my JD setup. I, too, have been a long-time Things user and it was the task manager I kept coming back to for many year. My take would be to simply use (just) the JD numbers I need and not to necessarily recreate the whole hierarchy in the task manager—and I think that would work with Things quite well: 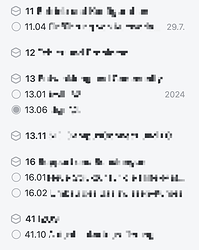 I’d usually map the IDs to projects and the categories to (Things) areas—while making exceptions, where needed (see the 13.11 area).

Though we already know, that your needs are more complex than mine, so YMMV.

I never got into OmniOutliner and hope to stick with NotePlan nowerdays, but something like Todoist might be worth a look for you, too. Or AirList—still in beta, a web app (iOS app still in beat, too, I think), but very interesting features. Knows start and due dates, can do links internal wiki links with automatic backlinks, sub-tasks can be defines as being both sequential or parallel (similar to OmniOutliner?).

Thanks. That’s exactly how I’ve been using Things 3. So at least, you’ve provided me with confirmation that I’m using it to the best of its abilities.

When I started using Things 3 right after it came out, I had to stop using it because I was at a job that we all used PCs and for reasons I don’t remember, I had to frequently attach files to the tasks. For some reason, Things 3 decided to never allow that. I used to use Trello because of the web interface and sharing, but then stopped.

I then went to OmniFocus because it allows attaching files, but OmniFocus is way too complicated for my brain. I always struggle to figure out how to create a project, a folder or a task. I’ve never used OmniOutliner, or pretty much any Outliner. I discovered Zavala here in a post, downloaded it, and that’s free and more than enough for my needs.

If I ever need an outline, my brain prefers doing those in Mindnode.

I had never heard of AirList so I’m going to look it up. Sounds promising.

Any other apps or setups that others want to share are welcomed!

I’m using a task app called Marvin, which is really great for my particular variety of ADHD. As I’m processing my Marvin inbox throughout the day, in addition to prioritizing and scheduling the task, I put my JD number at the front of the task title.