Thank you for your feedback!

This is exactly why I recommend having an ‘index’ to keep track of your IDs. If you’ve got some (but not all) in Agenda, and some (but not many) in your file system, you’ll need to know what’s where. These days I lean towards using Airtable for this sort of thing as it’s so flexible. But you could also just store ‘blank’ numbers in Agenda (to indicate that there’s a file in the file system), or some other trick.

Initially I skipped a separate index but as your are arguing, the filesystem should not be the index—and so neither should be Agenda for me. So I think I’ve seen the light there.

), but I found that Apple Numbers actually can do something similar quite nicely—and I own that anyway. 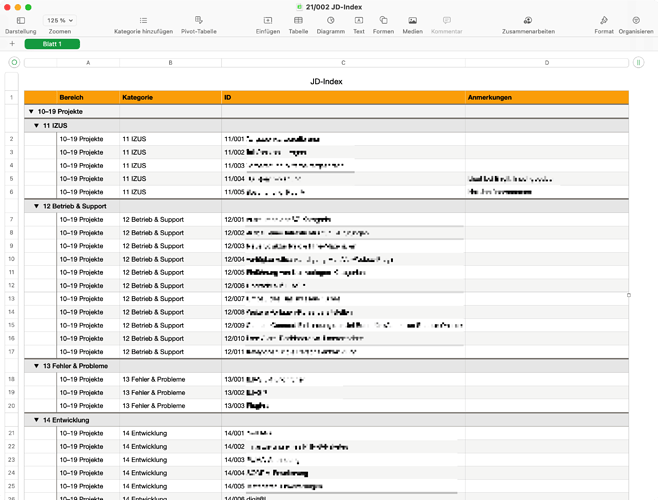 PS: The project status emoji didn’t make the cut, by the way.

The Index - Tools and Best Practices
Using an outliner for the index
johnnydecimal November 30, 2021, 2:17am #4

Oh nice, I didn’t know Numbers did that. Do you have some sort of grouping going on there? Mind sharing how?

Sure. You just select a column or a cell from the column and add a category via the Organize (?) menu (don’t know how it’s called exactly in English). 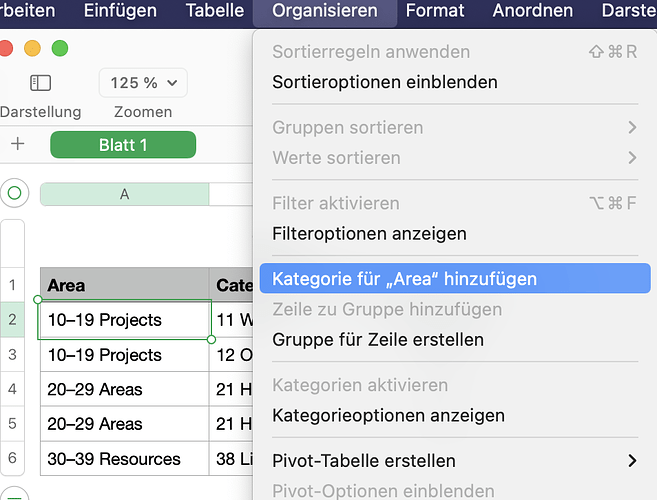 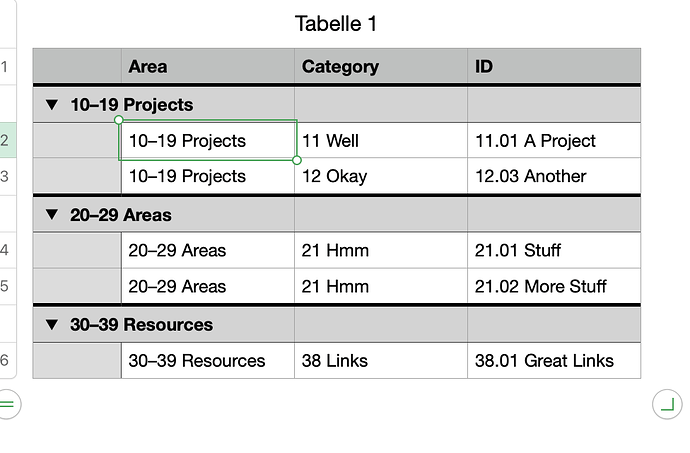 You can then add more … 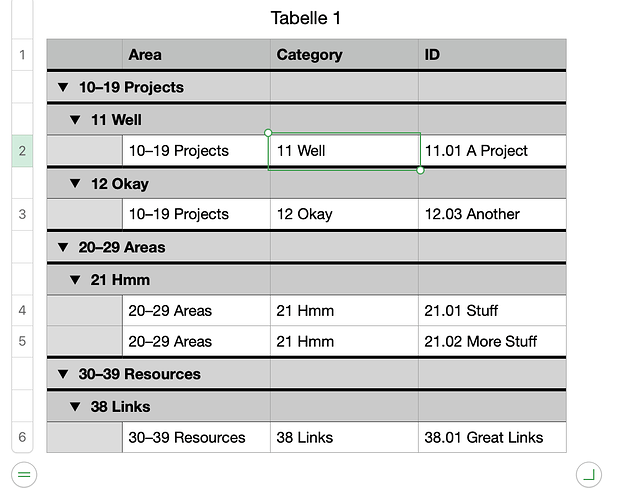 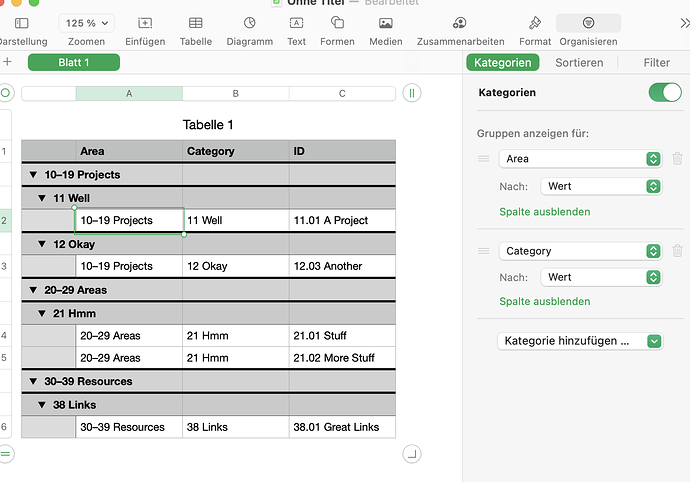 (I just found out about this yesterday, so I can’t tell you more.

By the way, I did not expect how good it somehow feels to have that index!

Thanks. That looks good. I also didn’t know you could do that in Numbers. I will try it as well.

My “big picture” index is in Mindnode. I go through the names there at least once a week to see if I need to tinker with my system. My brain finds it real easy to go through it there and then I just drag a node to where I want to change it and “voila”. I then make the changes on my Finder.

That being said, my Finder is my main place with ALL numbers. I haven’t made a Mind Node (or anything else) adding, for example, all client numbers.

Not sure. Sounds/looks like you’ve accidentally also tripped some kind of auto sorting? 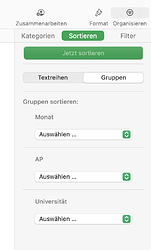 But I only dabble in Numbers very infrequently, sorry.

THanks. I don’t use Numbers that much either. I haven’t figure out what kind of sort it is that puts 20-29 ahead of 10-19. Once I enter other numbers, they then get put below 10-19 in order as well…that’s where I get confused as to what happened to 20.

This is really weird! Could you take any personal information out of the file and upload a copy here? I’ll take a look.

Thanks. So here is what it looks like. I took a couple of screenshots of the spreadsheet, and took a picture of how the spreadsheet is sorted. The odd thing also is that it created a “category 2” column on the far rights which you’ll see here as well. 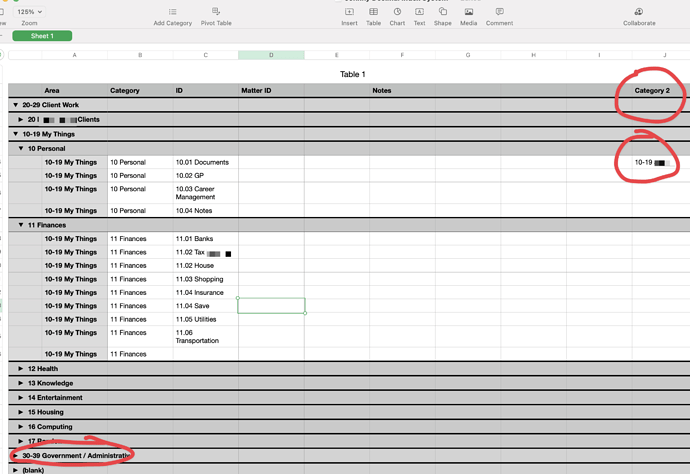 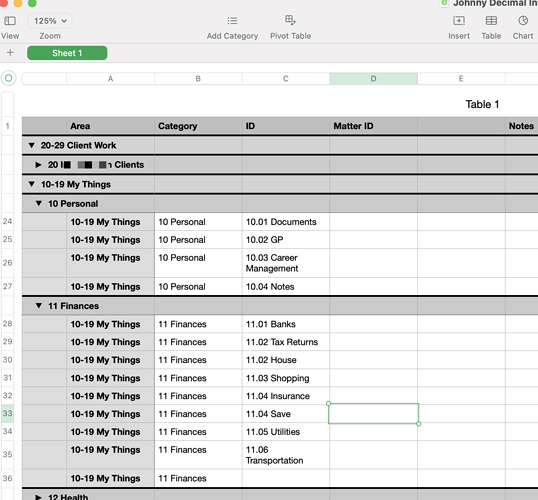 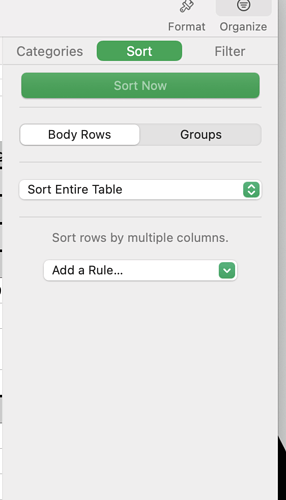 I have moved my entire jD Index from Google Sheets into Notion a while ago. Haven’t played too much with it but since I am currently also working on establishing Notion as my “control panel” for pretty much everything its nice to directly relate to the jd index database in that way.

There is also a lot you can do with views to filter the list as it gets more populated with numbers.

Nice. Can I dig in to understand a little here… ? PARA and JD is also something I’m pondering…

I notice that, for example, your IZUS projects (11) don’t correspond to your IZUS area (22). I think my brain would want to correlate subjects such that IZUS has the same number, wherever it is…

I am contemplating allowing an Area-specific project to carry an Area-based ID even if, and for as long as it is in the Project folder. So, regardless of the fact that IZUS projects are (11), I an contemplating Projects/22/003 Project Name, at least for as long as the project is active and not archived.

How do people feel about that?

I haven’t fully dived into PARA and can’t yet wrap my head around how Projects, Resources and Archive could, in my opinion, all live hierarchically under Areas/IDs. All Projects surely relate to an Area/ID - I could imagine keeping them in Projects for as long as they are active and need attention as projects, but then I’d consider moving them into the relevant area. However, doing PARA within every ID may get tiresome.

In Notion, tackling this was straightforward, because I’d have parallel databases, Projects and Areas/IDs, relationally linked. But, in a folder-based system, it’s a bit different.

I’ve long given up on PARA, so I’m probably the wrong person to ask. I guess especially the differentiation between Areas and Resources was something I kept struggling with and something I felt that kept holding me back in terms of “good” J.D structure.

While I’m at it I have to make another confession: I gave up on J.D for my notes altogether, too—simply because I switched to Logseq and the approach I sketched in AC.ID for notes and files did not really work there for me, since tags in Logseq are links, too, and the difference is purely cosmetic; against this backdrop J.D was beginning to feel too much like a burden. (I think I’ll keep J.D for files and am in the process of building a new index with those in mind.)

I still haven’t got in to the connected-note lifestyle, but Logseq looks interesting enough to try.

I’ll be starting a new job soon which is always a nice time to start on some sort of new system.

I notice that, for example, your IZUS projects (11) don’t correspond to your IZUS area (22). I think my brain would want to correlate subjects such that IZUS has the same number, wherever it is…

A solution could be to correlate the second digit:

Tips—good question. I’m still a new user, I guess. I guess the best tip would be: Take you time to play around with it.

Some random thoughts on Logseq …

The way some aspects of Logseq work (AFAIK as opposed to otherwise similar apps like the ever-present Obsidian (?)) needed some rethinking of note-taking for me. At least the fact that tags really are not, well, tags in the “classical” sense but merely different visual representations of page links, threw me off at first. Like I wrote I tried to (more or less) fit my “old” approach to J.D’d notes from my NotePlan days in there and it didn’t work. I’d have eg. a page “11 ILIAS” but would not want to use that as a tag, too (eg. in the Journal’s daily notes)—but “#ILIAS” of course gave me an additional page “ILIAS” for the same thing.

Giving that up the strict J.D approach made note-taking feel a bit “lighter”, a bit more unconstrained again, though—not a disadvantage. (After all J.D was borne chiefly for files.

Some reasons why it won me over in the end (only after it finally got mobile apps) despite the fact that Agenda is a very, very good note-taking app:

Some things I don’t like (and have made my peace with):

I use the Journal/daily notes a lot (I was even “simulating” those with a kind of Logbook → Year → Month → Day structure in Agenda).

(I’m not an academic in a narrower sense and I’m not trying to write (academic) books or journal articles (where a “Luhmannian“ Zettelkasten approach might make sense) …)
I just link notes. I actually don’t have a central index note. I do have a few topical “portals”, though.

I don‘t obsess about my “graph”. I actually looks kinda messy, I guess. Sometimes the feature seems useful for finding outliers, though.

A(nother) caveat a few weeks further in: While there have been mobile versions of Logseq for a while now, there does not seem to exist a great sync option.

iCloud eg. seems especially (?) bad (which, yes, in part might be Apple’s fault, but then again there are two ways for apps to use iCloud, just files and the better one that eg. Agenda and Ulysses use—and of course Logseq only offers the former, not the latter; also other options don’t seem to fare much better, except maybe Git which but has its own set of caveats). Basically you really have to make sure to use it only one device at a time and that data is really synced before you switch devices, or you‘ll risk serious dataloss.

Apparently there is a dedicated sync service (like Obsidian has one) in the works but not ETA, info on pricing etc.

Might turn out to be a dealbreaker for me.

Which is said because otherwise it really has a lot of strong points.

I’m using Syncthing for the Logseq sync between my Android and the PC. The local PC folder, additionally, is synced to MS OneDrive for significant revisions and I also run a “git push” from the Command Line to upload the commits into my Github private repository.